Darling in the Franxx

Round of 32 (2018)
Zero Two is the main heroine of Trigger and CloverWorks' anime original series Darling in the Franxx.

During the anime's original airtime, Zero Two gained a large online following because of her distinct design, strong personality, and dedication to Hiro. Even after the anime's rating dipped in the later episodes, the klaxosaur remains one of the show's highlights.

Zero Two was the darling (pun intended) of the r/anime subreddit in 2018, having won the site's winter seasonal after thrashing rivals Violet and Ichigo. She then came second in the yearly contest after the subreddit found another more popular darling in the form of Mai Sakurajima.

In the subreddit's major character brackets, Zero Two (and the DitF fandom by extension) developed an infamous reputation for brigading the contest to other subreddits, causing much discussion and violent reactions in the r/anime contest threads. Her most famous match happened in Best Girl 6 where she fought Asuna Yuuki, another Tomatsu-voiced character, in the round of 32. The links to the contest's particular day was cross-posted to Zero Two's home subreddits r/DarlingintheFranxx and r/ZeroTwo. Most importantly, a campaigning thread managed to get a high amount of upvotes on r/Animemes, a subreddit where the pink-haired girl has a notable presence in.[citation needed] Despite those efforts, Zero Two ultimately lost by a slim 32 votes, and the large influx of voters affected other matches of their bracket as well, resulting in Asuna securing an easy path to the championship afterwards.

Another instance of brigading happened in Best Character 5 where Zero Two won against last year's quarterfinalist Homura Akemi in round 3. Following the tournament host's policy of disallowing brigades, her bracket's round was replayed for another day, with the klaxosaur bowing out in the ensuing rematch.

Since then, Zero Two's performances have been characterized by high seeds but relatively early exits, i.e. an "overrated waifu". Common criticisms include the aformentioned brigading of her fans, and the anime's poor reputation towards the end of the series.

Zero Two is a regular but mediocre competitor in the International Saimoe League. In the winter 2018 seasonal contest, she lost to romantic rival Ichigo in the semi-finals, and settled for third after defeating Takagi. The following year, Zero Two made a modest debut in 2019, surviving until the Emerald period (fifth group stage). In 2020 she finished dead last in the second split -- a 16-player single round-robin format -- with only one win to her name.

The 2021 edition saw the emergence of a DitF fanbase who became very involved in their campaigning efforts in the tournament, which was largely brought about by the anime's popularity in the Chinese app Douyin (known internationally as TikTok). As a result, Zero Two and Hiro topped their respective nomination lists by a large margin, with deuteragonists Ichigo and Goro likewise making their presence near the top as well. 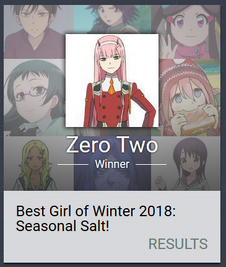