Yukino Yukinoshita is the lead heroine of the light novel series My Youth Romantic Comedy is Wrong, As I Expected (usually shortened to Oregairu), written by Wataru Watari, illustrated by ponkan8, and adapted into anime by Brain's Base (season 1) and Feel. (seasons 2 & 3).

Debuting in 2013, Yukino's anime opened to merely lukewarm reviews. However, things changed when Oregairu' s Season 2 aired in 2015, and in that year she attained her best performances yet, cemeting her place as a powerhouse girl by winning r/anime's Best Girl 2 and finishing as a runner-up in ISML 2015. Yukino's championship run in Best Girl 2 as a #9 seed include upsetting #1 seed Rin in the quarters, #4 seed Hitagi in the semis, and spoiling #3 Saber's championship dreams in the closest ever Best Girl finals yet, winning by a score of 8778-8699.

Yukino is one of the strongest contenders in International Saimoe League at the moment, never missing the postseason in all of her ISML appearances so far. Besides finishing second in 2015, she also reached the semi-finals in 2016 and 2018, and has won three necklace rounds plus a Sapphire circlet from her Nova Bracket win in 2015.  But being a major candidate also has its risks, and Yukino has been subject to spite-votes and upsets, most notably in 2019, where she lost to Rikka in the round of 16 as a first seed. (The light novel's final volume being released at that time may have contributed to her downfall.)

Yukinoshita Yukino's name contains the Japanese character for snow twice, which happens to be an all too fitting representation of her personality. To an outsider, Yukino is cold, calculating, and blunt. She will not hesitate to give her exact opinion on other people, however piercing it may be. None of her classmates seem willing to understand her, but Yukino does not mind that. She will nevertheless afford a few minutes to "educate" those incompetent with her "grace." But the view from the top of the world can sometimes be... cold.

For those who do know her better, Yukino expresses a different kind of coldness. But to begin with, most of them see her as nothing but a shadow of her older sister. Yukino's relationship with her sister is both a blessing and a curse, a dream and a nightmare. She is Yukino’s measuring stick in terms of capabilities and the target of Yukino’s jealousy. She is Yukino’s idol, the person whom Yukino wants to overcome, and the last person Yukino wants to be acquainted with. Yukino knows she will never be like her sister, yet people still expect her to. She can never meet their expectations.

Behind the cold eyes hides a lonely girl trapped in a barren middle ground between two worlds. She sits alone in an empty room with no one to talk to but her shadow. A warm ray of light shining through a cool, frosty window reminds her not only of the coming of spring, but a second chance to unite the two distant worlds into her own. Maybe then can she smile with more radiance than a flower blooming through the melting snow.

Playoffs - seed 3 (based on total CVP)

ISML portrait
Add a photo to this gallery 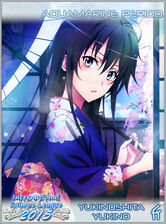 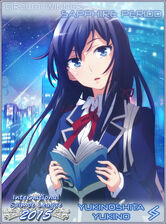 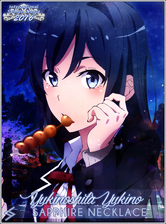 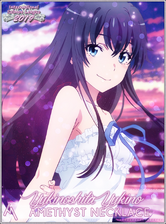 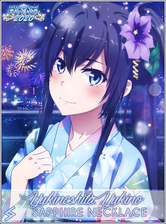 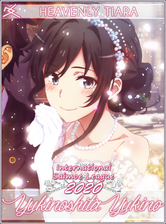 2020 Tiara
Add a photo to this gallery

Retrieved from "https://saimoe.fandom.com/wiki/Yukino_Yukinoshita?oldid=27975"
Community content is available under CC-BY-SA unless otherwise noted.