Souma Yukihira is the titular protagonist of Shokugeki no Souma, a shonen manga series written by Yuuto Tsukuda which is known for Shun Saeki's attractive art style, cutthroat cooking competitions, and literal foodgasms.

Shokugeki's popularity reflects the eponymous chef's performance in the male saimoe contests. The series peaked in the mid-2010's following the first two anime seasons, but the latter chapters of the manga left a foul aftertaste on its readers, causing its popularity to sharply decline near the end of the decade. Accordingly, Souma's best results came from 2016 to 2017, having reached the Elite Eight of the Chinese Bilibili Moe contest in 2016, and the Western r/anime forum's Best Guy Contest in two editions. In the ISML tournament, Yukihira also reached the playoffs on those two years, and won his first pendant on the latter edition. But like the manga, the chef has never tasted this same success ever since. 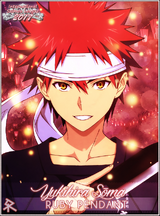