No Game No Life

2014: Round 1
Shiro is the main female protagonist of Yuu Kamiya's light novel and anime series No Game No Life.

In the story, Shiro serves as the other half of the legendary duo 「 」 (pronounced "kuuhaku" or "blank") alongside her older step-brother Sora. These "gaming prodigy" and "imouto" characteristics have contributed to her status as the series' strongest female player in the International Saimoe League, where her most significant achievements there include a seasonal diadem win in 2014, and two quarter-finals appearances in 2016 and 2018. The white-haired girl also holds the distinction of having the most necklace appearances without a single win.

Shiro is one of the few characters to have reached the fourth round in all of r/anime's Best Girl editions, and has consistently entered the bracket with the highest seeds. However, she has a reputation of under-performing, having been subject to multiple upsets, and only getting to the fifth round at most in three separate occasions. Only her same-series rival Jibril has survived beyond that stage.

The gaming prodigy has appeared in China's Bilibili Moe contest two times: in 2015 where she lost to Kurisu Makise in the round of 16, and in 2018 where she failed to make it past the group stage.

If an anonymous e-mail offered to transport you to a world where everything is decided through a game, would you take the offer? Not only did Shiro and her brother do just that, they did not need to think twice about it. And the new world they ended up in... is so much better than Earth!

If it is about games, the team made up of Shiro and her brother, collectively known as Blank ( [ ] ), will never lose. Coming up with a multitude of strategies both before and during battle, Blank will unfailingly make sure that they are always one step ahead of their opponent. Thinking together and working as a unit, if a situation does not go their way, they will just have to come up with a new plan, no matter the pressure they are under or how much is at stake.

Individually, Shiro is logical, calculating, and a quick learner. Shiro's vast knowledge and her ability to calculate all possible outcomes and combinations in a single game as well as predict her opponent's next move all make her a formidable opponent. Shiro may not do so well with unconventional thinking, but she does not need to be. She has absolute trust that her brother will take care of that part for her. Outside of gaming, Shiro enjoys learning about new things. She also likes cute things and being doted on by her brother every so often. Shiro may not like it when people treat her like a child, but there are moments where she does not mind it, if it works in her favor.

While this new world of games appears fun, there must be a dark side to all this freedom. Shiro is willing to face God himself if it means finding out why this world functions in this particular manner. And that would be one game Shiro, her brother, and the world as a whole, cannot afford to lose.

When Sora and Shiro's Japanese names are put together, they form the word kuuhaku (空白), which literally means blank or empty space in English. This is the reason why their group is named 「 」 --- which is simply a pair of Japanese quotation marks, but with nothing inside it. 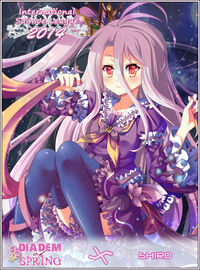