Edit
watch 01:36
We're Getting Mutants in the MCU - The Loop
Do you like this video?
Play Sound

Shana is the titular heroine of of Yashichiro Takahashi's light novel Shakugan no Shana. She is a "Flame Haze", warriors who have contracted themselves to inter-dimensional entities called "Crimson Lords". The character is named after her katana "Nietono no Shana" by the main character Yuji Sakai, and is referred to by her epithet "Flame-Haired Burning-Eyed Hunter" among other Flame Hazes. Shana is contracted to Alastor, a very powerful "Crimson God" who resides in a pendant.

Shana gained huge popularity in the anime / otaku fandom because of her highly moe characteristics, such as tsundere, petite figure, appetite for melon breads, and her signature triple "Urusai!" catchphrase. She is credited to have popularized an archetype of tsundere characters who share her common traits. As a result, Shana enjoyed a powerful presence in the otaku-oriented 2channel's J-Saimoe and Anizone's Korea Best Moe, spending much of the 2000's as a favorite to win both tournaments. However, she failed to win a single title despite multiple appearances in the final rounds. Both events eventually became defunct during the early 2010's, leaving behind a legacy of broken promises and a reputation as one of the biggest chokers in saimoe history.

After the demise of J-Saimoe and KBM, the International Saimoe League was considered Shana's last chance for championship glory, as it was the only remaining major tournament where she still has a chance to win. The blazing-eyed hunter finally extinguished her past demons by winning the Heavenly Tiara in the shortened 2016 contest - her 9th Main Tournament appearance.

Shana is one of the most storied and successful girls in the International Saimoe League, having won a joint-second most necklaces with seven, appearing in three finals (2009, 2010, 2016), and becoming the first girl to reach 300 regular season wins. However, she is the least popular competitor in ISML's Tournament of Champions due to her dated status, placing last in most of her ToC appearances to date.

Shana will be eligible again in ISML 2022 following the recent announcement of that year being the last edition, and removing both the champions ban rule and the Tournament of Champions. She will attempt to become the first girl to achieve the long-elusive "rainbow necklace", or win a gem round from each of the seven periods at least once.

Shana is the namesake of the anime archetype known as "Shana Clones", because she popularized the concept of a female character defined by these characteristics:

This type of character proved very popular with anime fans, and by 2006 Shana blazed a trail (pun intended) in the Saimoe Tournaments, reaching the semi-finals of both Japanese and Korean contests in her first year. She would establish a constant presence in both of these tournaments, always appearing in the latter rounds for the better parts, but unfortunately, she would end up never winning any of them.

Among these harrowing losses includes one of the closest ever finals match in a major tournament: a loss against Hinagiku Katsura in Korea's 2007 edition by a score of 2013-2015, a vote difference of just 2 votes. Hinagiku would later steal Shana's championship again in the same fashion in ISML 2009, torturing the Flame Haze by a score of 2106-2117, a margin of just 11 votes. Shana would later return to the finals two years later, only to lose in a heated match-up against the super-charged Mikoto Misaka by a score of 8052-9208.

Shana continues to perform decently well in ISML's Nova / Stella Era, reaching the postseason from 2012-2014, but her chances for Tiara contention have been sidelined in favor of other girls from more popular series; and she entered a state of decline in 2015 because she failed to make the postseason that year.

All is not lost however, as the Nova / Stella era divisions were merged, a new tournament format started to emerge in ISML 2016. The year saw a drop in voters, making the 2016 edition's numbers on par with ISML's early years. Shana's strength was reignited in this year, winning the Amethyst necklace (her first in 5 years) and finished as the 2nd seed in the regular season. In the final group stage, she finished first in Group B, before defeating Rin, Yukino, and surprise finalist Illya in the playoffs. After a decade of chasing major championships, she finally attained the most prestigious prize she rightfully deserves: the 2016 Heavenly Tiara. 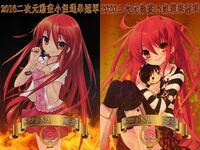