Sakuta is a highly popular anime protagonist who is widely praised for his deadpan attitude and direct manner of behaviour, and benefits from his girfriend's massive popularity leeching onto the male contests. Debuting in the Fall 2018 anime season, Sakuta made an immediate impact in the 2019 edition of the International Saimoe League, securing the first seed in the playoffs, but lost in the final to fellow debutant and Fall 2018 character Rimuru Tempest He returned to the finals in 2020, but lost yet again as he became the last cobblestone that completed Miyuki Shirogane's golden royal road. He has won 2 pendants to date.

The titular rascal is also a powerhouse character in r/anime contests thanks to his show's very high rating by its users. He made his first Elite Eight showing in Best Guy 7 after taking down shin-kicking the top-seeded Eren Yeager out of the tournament in the round of 16.

ISML icon
Add a photo to this gallery 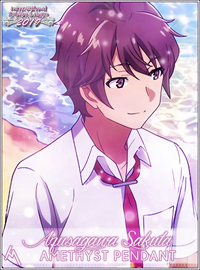 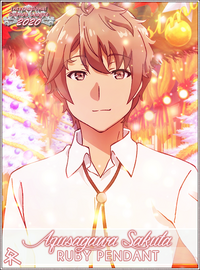 ISML 2020 Ruby pendant
Add a photo to this gallery

Retrieved from "https://saimoe.fandom.com/wiki/Sakuta_Azusagawa?oldid=30865"
Community content is available under CC-BY-SA unless otherwise noted.