Anime Saimoe Tournament 2009, or in short Saimoe 2009, is an anime popularity contest that took place from June 20 to October 17 of 2009. The main tournament lasted from August 4 to October 17. The winner of Saimoe 2009 is Taiga Aisaka, and the runner up is Yui Hirasawa. 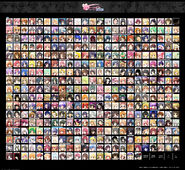 Saimoe 2009 Tournament Participants
Add a photo to this gallery

Retrieved from "https://saimoe.fandom.com/wiki/Saimoe_2009?oldid=8180"
Community content is available under CC-BY-SA unless otherwise noted.