2015:
Saika Totsuka is a supporting character featured in Wataru Watari's light novel series My Youth Romantic Comedy is Wrong, As I Expected, also known by its shorthand name Oregairu.

Totsuka is primarily remembered for his trap characteristics. Between his bishounen looks, feminine-sounding voice, and a meek personality, he is occasionally mistaken in the story as a girl. This makes him a beneficiary of the "trap buff" present in the International Saimoe League. He also appeared in the editions where the Oregairu TV adaptations aired, making him a clear example of recency bias.

After Hikigaya's victory in 2018, Saika became Oregairu's successor as the primary male representative. The high school student made his breakthrough in 2020, winning the Amethyst exhibition award (ring) and reaching the playoffs for the first time in his career.

Saika Totsuka is a student of Sobu High School, a member of Class 2F and classmate of the protagonist Hachiman Hikigaya. He is well-known for his feminine appearance and a gentle, friendly personality. He is the captain of the school's Tennis Club, and is skilled at playing the sport. His appearance alone inspires fellow members to perform better.

Saika is nicknamed "The Prince" by his female classmates because of his physical traits (and also doubles as an indirect reference to the manga The Prince of Tennis).

The tennis club captain considers Hikigaya as his friend, calling him by his first name, and being one of the few students to have the latter's phone number and email address. Saika's interactions frequently cause Hachiman to fluster, and cause the latter to "forget" that he is not a girl.

More detailed information can be found in the Oregairu Fandom wiki page. 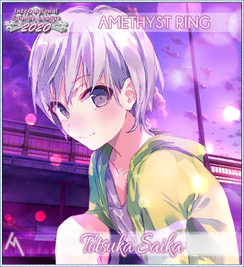 Retrieved from "https://saimoe.fandom.com/wiki/Saika_Totsuka?oldid=26642"
Community content is available under CC-BY-SA unless otherwise noted.