Sagiri Izumi is the titular heroine of Eromanga-sensei, an ecchi romantic comedy light novel series written by Tsukasa Fushimi with illustrations by Hiro Kanzaki. The younger step-sister of protagonist Masamune, Sagiri is a 13-year old shut-in who is secretly the illustrator of Masamune's light novels and is also a popular streamer online.

The white-haired imouto is best known for her dedicated following in East Asian countries, especially in China where she placed runner-up at the local Bilibili Moe contest in 2017 behind the massively brigaded Mash Kyrielight from Fate/Grand Order. Sagiri is also a fairly strong regular contestant in the International Saimoe League, which also has a vocal East Asian voterbase, and made her best results in 2019 with a necklace win and quarter-finals finish.

Sagiri first appeared in ISML 2017's Spring seasonal where she lost in the semi-finals by eventual winner Chtholly. She made her first main tournament in 2018 and made the playoffs by escaping the last-chance qualifier during the Diamond gem round. Seeded at #16, Sagiri was promptly blown out by newcomer and top favorite Kanna Kamui.

The stepsister enjoyed her greatest success yet in ISML 2019, a tournament which saw the number of girls in each group reduced to 4. The change turned out in Sagiri's favor as she enjoyed a good record throughout the regular season, and even won her first necklace during the Sapphire gem round. She scored 2 wins in the Diamond period and qualified for the playoffs as a #7 seed. Sagiri then scored a fairly easy win against Iroha Isshiki in the round of 16 before falling to eventual champion Violet Evergarden in the quarter-finals. 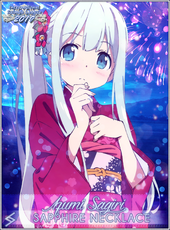