Saber is one of the longest-running females still competing in anime character popularity contests. Her longevity is attributed to her status as the "face" of the Fate universe, and its multitude of anime installments and spin-offs spanning almost two decades.

Saber's power arguably reached its peak in the mid-2010's, a period where the Unlimited Blade Works adaptation was aired. In 2015, she finished runner-up in r/anime's Best Girl 2 after losing to Yukino Yukinoshita by 78 votes. Later that year, she won her first major championship in the inaugural edition of China's Bilibili Moe contest, blowing out same-series rival Rin Tohsaka in the final match. Saber's best finish at the International Saimoe League happened in 2016; after getting knocked out by Prisma Illya in the quarter-finals, she then secured third-place through the consolation matches.

Saber first appeared in the 2004 eroge visual novel Fate/stay night and its anime adaptations. In the story, she is a "Heroic Spirit" summoned by the magus Shirou Emiya as the latter finds himself in the middle of the fifth "Holy Grail War". The War is a magical tournament involving seven "Masters" and their "Servants" (mythological and historical figures) fighting in a battle royale to obtain the eponymous Holy Grail, which is said to grant any wish to the winner. As one of its main characters, Saber is prominently featured in all three routes, but she serves as the main heroine and love interest of Fate, the visual novel's first route.

Saber also appears in the prequel light novel and 2011-2012 anime Fate/Zero as the Servant of Shirou's foster father Kiritsugu Emiya. The story usually involves the knight fighting the other Servants, while Kiritsugu seeks to kill other Masters using conventional weapons. 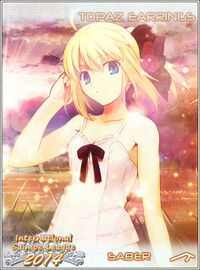 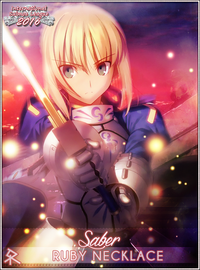 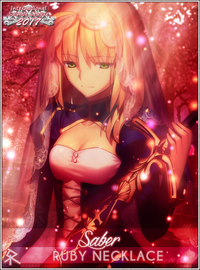 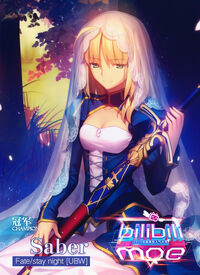 Bilibili Moe 2015 - Champion
Add a photo to this gallery

Retrieved from "https://saimoe.fandom.com/wiki/Saber?oldid=29974"
Community content is available under CC-BY-SA unless otherwise noted.