2015: Round of 32
2018: Round of 128 Groups
Rintarou Okabe is the main protagonist and player character of the visual novel and anime series Steins;Gate.

The self-proclaimed "mad scientist" is best known for his performances in AnimeBracket, where he is widely regarded in the subreddit as one of the greatest characters of all time. Okabe holds the distinction of having the most runners-up finishes in r/anime major contests, having made three appearances (two best guys, and one best character) in a span of two years. Because of this, many of the users believed that he will never win a major contest. However, this notion was broken in 2018, where he won the fourth edition of Best Character. He then re-affirmed his rightful place in the pantheon with his victory in the second "Best of the Best" contest in 2019.

Likewise, Okabe maintains a solid presence in the long-running International Saimoe League contest. His best year also happened in 2018, as the airing of Steins;Gate 0 helped him achieve his first pendant and finish a career-best third place.

Rintarou has appeared in two of China's Bilibili Moe contests. In 2015, he won his group before losing to Lancer in the bracket stage. He wasn't lucky in the 2018 edition however, as he finished a distant second behind tournament favorite Archer in his group.

He believes that lab coats are the epitome of ecstasy, claims that Dr. Pepper is a drink meant solely for the intelligent, and considers himself a mad scientist. Only one man fits this description: Hōōin Kyōma!...although the majority of his acquaintances prefer to call him by his real name, Okabe Rintarō, much to his chagrin.

Like all self-proclaimed mad scientists, Rintarō spends most of his time carrying out what Is commonly seen as absurd experiments. Unlike most mad scientists, Rintarō has a bigger goal in mind: to save the world from an evil organization that he claims will one day terrorize the world. He makes daily calls to his associates informing them of the terrible things that the organization has done and formulating the necessary countermeasures...but everyone knows it is all in his head and that he is probably doing it to get out of trouble.

But when the improbable claims he makes slowly turn into reality, Rintarō has to reconsider his whimsical nature. Could the things he has been doing actually change the world around him? What if some of his choices are impossible to revert? Rintarō does not wish to deny the desires of his friends, but when so much around him has been altered, could he still let his selfishness get the best of him?

With his friends by his side, Rintarō is reminded that he need not shoulder this burden all on his own. Rintarō gambles on the power of his bonds, hoping to create a world free of suffering. After all, it is just one more experiment. What could possibly go wrong?

Steins;Gate is a visual novel developed by 5pb and Nitroplus. Released in 2009, it is the second main entry of the larger Science Adventure series of science fiction visual novels. A sequel game, titled Steins;Gate 0, was released in 2015. The sequel game features new characters, and a different storyline that takes place during the events that occurred near the end of the original game.

Steins;Gate was adapted into a TV series by the studio White Fox, and was first aired in Japan during the Spring 2011 season. The adaptation primarily follows the events leading to the "True Ending" seen in the games. A film titled Steins;Gate: The Movie − Load Region of Déjà Vu was released in 2013, featuring an original story that takes place after the ending of the TV series. Five years later, a TV adaptation of Steins;Gate 0 was created, with its first episode airing in Spring 2018.

The original game was given an updated re-release titled Steins;Gate Elite, featuring fully animated scenes from the White Fox adaptation, as well as new ones from the same studio. The remake was released in Japan on 2018, and internationally on 2019.

A thematic sequel tentatively named Steins;??? is currently under production, which will feature the return of several of its main characters. Its release date is currently unknown.

As the player character of the Steins;Gate series, Rintarou Okabe appears in all of its installments.

In the story, Rintarou is depicted as a lanky man with black hair and yellow eyes, and is usually seen wearing a laboratory coat. He is a university student currently living in Akihabara, one of the wards in Tokyo. Okabe is the leader and founder of the "Future Gadget Laboratory" which creates inventions of varying usefulness. Okabe's behavior often exhibits delusions of grandeur (termed chuunibyou; literally meaning "middle-school second-year syndrome") despite his age.

BMoe 2018 icon
Add a photo to this gallery 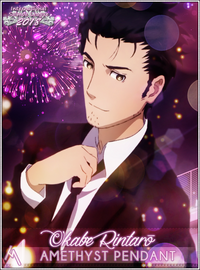 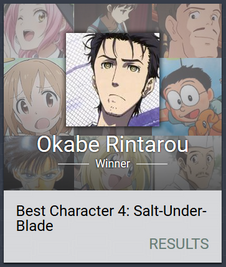 Best Character 4: Salt-Under-Blade: Champion (2019)
Add a photo to this gallery

Retrieved from "https://saimoe.fandom.com/wiki/Rintarou_Okabe?oldid=26894"
Community content is available under CC-BY-SA unless otherwise noted.