Kaguya-sama: Love is War
JP: Kaguya-sama wa Kokurasetai: Tensai-tachi no Renai Zunousen (lit."Kaguya-sama Wants to be Confessed to: The Geniuses' War of Love and Brains")

Shirogane benefits from being the main character of a massively popular manga and anime series in the early 2020's, so it's not surprising that he gets the highest seeds and most favorites in anime character popularity contests. In the r/anime contests held in AnimeBracket, he finished as a quarter-finalist in his first entries on Best Guy and Best Character. Shirogane's partnership with Kaguya went as expected too, placing runner-up in the subreddit's sixth Couples/Ships contest behind the Aobuta main couple Sakuta x Mai. Despite these late-round losses, he is still expected to win an r/anime contest in the near future.

In the International Saimoe League, he and Kaguya won the 2019 Couples/Ships exhibition contest, beating the much-fancied Hyouka pair Oreki x Chitanda in the final. The president is currently one of the favorites to win the main tournament in 2020, and is looking to follow the Slime's trail of winning it all as a debutant.

Miyuki Shirogane serves as the student council president of Shuchiin Academy alongside vice-president and love interest Kaguya Shinomiya. His defining trait is his academic intellect, no doubt a fruit of his hardwork and determination to stand on equal footing to Kaguya, who is also considered one of the best students in the school. The series' premise concerns Shirogane trying to get Kaguya confess his love for him, and make her lose the "war of love and brains". The relationship of the two leads is an important facet of the series, and its in-depth exploration of their love story (compared to other rom-com mangas) has won the hearts of many audiences.

More detailed information can be found on the Kaguya-sama Fandom wiki page. Spoilers on the link.

When it comes to popularity within the Kaguya-sama fandom, Miyuki pales in comparison to main waifu Kaguya, memelord cute girl Chika, relatable /ourguy/ Ishigami, and Hayasaka simps. This is just speculation as there is no official popularity poll held yet.

In the "saimoe" contests however, the monster virgin is, well, monstrously popular for obvious reasons, and popularity begets success in these contests. Even though some of Shirogane's traits have in common with your typical "nice guy" anime protagonist, he is a safe and easy bet to vote for. He also possesses the "protagonist buff" ---- a tendency for main characters to perform better than the supporting cast ---- which is shared with Ishigami, the only other relevant male character in the series.

Miyuki made his first major tournament appearance in r/anime's Best Guy 6 held during the Winter 2020 season where he secured the sixth seed. This placed him in the second half of Group D together with Ishigami, who was seeded eleventh; their rivalry match in the round of 16 was hotly anticipated by the users. However, this match-up was spoiled by Sakuta (#22) kicking the treasurer out of the round of 32. In an apparent act of revenge, Shirogane defeated the rascal to reach the Elite Eight for the first time. In the quarter-finals, he lost to a My Hero Academia season 4 reawakened All Might (#3) who would eventually finish fourth place in the contest.

After winning the Couples/Ships contest in 2019, Shirogane set his eyes on another major tournament: the 2020 edition of ISML. And boy, did he dominate that tourney from the very beginning. Supported by the massive Shinomiya conglomerate Kaguya-sama voting block and the recent airing of the anime's second season, Miyuki attained the most nomination votes and the highest pot seeding in Aquamarine, thereby making him the outright favorite to win the Scepter. Only Ishigami, Sakuta, and Riku can rival him in terms of strength.

Envisioned as the "Golden Road", Shirogane laid the path's foundations through winning ALL 35 regular season matches undefeated and untied. Moreover, he became the first male to break several vote milestones, having earned more than 4000 and 5000 votes in two separate matches. Although he only placed third in the Aquamarine pendant round (won by Riku), he immediately struck back by winning the Topaz pendant, the gem that best matches his hair color.

As the Kaguya-sama males appear to become unassailable coming into the playoffs, the president will attempt to earn the distinction of becoming the first-ever male deubtant to complete a perfect season; his closest rival Ishigami will also attempt to achieve this feat. If all goes well for the both of them, they will face each other in the extremely high-stakes final match. 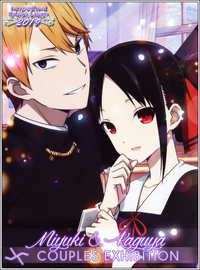 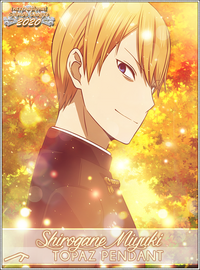 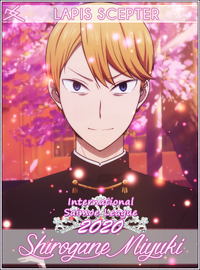