Misaki Shokuhou is a supporting character featured in the Toaru series of light novels authored by Kazuma Kamachi. She was first introduced in the spin-off manga and anime series A Certain Scientific Railgun.

The Queen Bee has made five appearances in International Saimoe League's main tournament. She first appeared in 2014, winning an exhibition award (Ruby medallion), and then competed in the 2015 regular season. She reappeared in 2017 where she was eliminated early in the tournament.

Misaki re-emerged as a fairly strong competitor in ISML 2020, taking advantage of the popularity boost caused by Railgun's season three broadcast and the return of its championship-winning title character in the main tournament. In that year, she narrowly edged out former playoff-tier characters Megumin and Nao in the third group stage, booking her first-ever playoffs appearance where she lost to top-seeded Kaguya in the round of 16. This result also secured Misaki a direct invite into 2021's preliminary rounds, which she easily survived en route to her fifth Main Tournament appearance. 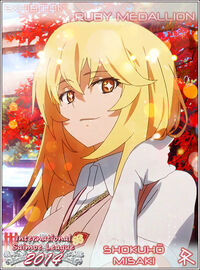