Mikoto Misaka is a character from the light novel series A Certain Magical Index, and the eponymous protagonist of its spin-off manga A Certain Scientific Railgun. In the story, Mikoto is a student of the prestigious all-girls Tokiwadai Middle School, and is ranked 3rd among the seven Level 5 espers, the most powerful in Acedemy City. She serves as the main heroine of the universe's "Science" side and one of Touma Kamijou's love interests.

Mikoto's superpower is control over electromagnetic forces. Her signature ability is the Railgun, a technique where she tosses a metal coin and uses lightning to shoot it at extreme speeds. She is also known by her nickname "Biribiri" - the Japanese sound of crackling electricity - which is given to her by Touma. The student was subjected under a cloning program as a template for the "Sister Clones" (notable members include MISAKA 10032 and Last Order), whose original purpose was to serve as targets for Accelerator so he can ascend into Level 6.

Misaka is one of the most successful waifus in saimoe history, having previously held the record for the largest number of tournament wins, until she got usurped by Rem from Re:Zero in the late 2010's. Her strengths lie in her numerous appealing traits, particularly her tomboyish personality, tsundere attitude towards Touma, and characterization in the anime adaptation of Railgun.

While Mikoto has fans from all over the world, her success is mainly powered by her extremely vocal and competitive Chinese fanbase, which has been heavily involved in several notable tournaments since her first appearance. Mikoto's influence in the Chinese fandom outside of saimoe is apparent in several ACGN-related things. For example, Bilibili[1], one of China's biggest video-sharing websites, is named after her nickname, and Hangzhou Spark[2], a China-based esports team for the video game Overwatch, is themed after the character herself, to the point that she became an honorary member for the team[3].

Misaka is also one of the most popular light novel heroines, which is shown in her dynastic reign as the queen of the Japanese Konorano light novel rankings, where she placed first in the "Female Characters" list for 9 editions.

Mikoto is the leading candidate for International Saimoe League's "Greatest of All Time" because of her numerous awards and consistently strong performances, not to mention she's also the most succesful former champion as of this time of writing due to her extremely active fanbase and recent new anime releases. She is ISML's most decorated contestant with 10 awards to date - having won ISML 2011's tiara, 7 necklaces, and two Tournament of Champions victories in 2017 and 2018.

While Mikoto is nowadays known for her tremendous success, she did not get into championship form immediately. Her tournament debut in ISML 2009, which came from her appearance in Index season 1, was a fairly unremarkable one as she finished in 42nd place.

Then, things changed when the anime adaptation of Railgun, where she starred as the main character, was broadcasted in 2010. As a result, Mikoto shot up from being a middling competitor to a championship contender in ISML 2010 - placing 4th in the regular season and eventually reaching the grand finals of the playoffs. However, she could not overcome Mio Akiyama, who sent her into the loser's bracket beforehand.

The Railgun remained undaunted as she placed 2nd in ISML 2011's regular season, behind the upstart Kanade "Angel" Tachibana, and thus the 2nd seed in the single-elimination playoffs, therefore avoiding her until the finals. She proceeded to beat Charlotte, Taiga, and Kuroneko on the other side of the bracket, then defeated 2009 runner-up Shana - who previously upset Angel in a prior round - in the final match to claim the year's Tiara award.

Misaka continued her dominant league performances during ISML's division split era, making her one of the period's "four horsemen" alongside Angel, Kuroneko, and Eucliwood Hellscythe. She was permanently assigned to the Stella division, a 35-man league for veterans. As one of the strongest characters in the league, Mikoto only needed to worry about the other "horsemen" and potential upstagers from the Nova (newcomers) division. However, due to winning the Tiara in 2011, her chances of a repeat championship were naturally diminished because of the "Moe King Debuff" - the tendency for former winners to be voted out because of sentiments against voting for repeat champions.

The Railgun's title defense in 2012 started strong as she placed 1st in the regular season, then won the Stella division playoffs (diamond circlet), her only division title during the era. Her season ended at the hands of Hellscythe in the quarter-finals. Then, in 2013, all "four horsemen" were transferred to Stella. Mikoto placed 3rd in the regular season (behind Angel and Kuroneko) and eventually advanced to the semi-finals, where she lost against Angel in their only significant postseason meeting in ISML, and finished in 4th place overall. Mikoto then came back with a vengeance in 2014 as she swept the regular season; but she lost the division final to Angel and was later sniped in the first round of the tiara playoffs by Yoshino from Date A Live.

Following ISML 2014, Mikoto was banned from the Main Tournament from 2015 until 2019, and was re-assigned for the Tournament of Champions instead. During her tenure as a ToC contestant, Mikoto won two editions in 2017 and 2018, making her the most successful female in the event.

The Railgun finally returned to the Main Tournament in 2020 and proved to be just as strong as she had left it 6 years ago, unlike most former champions which have become "washed up" upon their return. Her arrival was celebrated by the Toaru faction as it coincided with the broadcast of the Railgun anime's season 3. Taking advantage of these blessings, Mikoto proceeded to win her 6th necklace (emerald) and later placed 3rd in Split 3's Group A, only losing to new-generation powerhouses Kaguya and Mai. Mikoto then defeated Chika, Rin, and Kaguya in the playoffs, but fell short in the final against a determined, Oregairu season 3-boosted Yukino Yukinoshita.

In spite of this loss, Misaka continued her serious challenge in 2021, winning her 7th necklace (sapphire), finishing 34-1 in the three-splits regular season, and securing the #2 seed in the playoffs. Her only loss came against Kaguya, which she avenged in the semi-finals like last year. Unfortunately, she still could not overcome the "Moe King Debuff" hurdle when she fell against the undefeated rookie Elaina in the final match. In the wake of Misaka's narrow defeat, some Chinese fans blamed the result on Korean voters, as ISML's vote distribution map indicated that almost all of Koreans voted for the wandering witch.[4] This may be attributed to the fact that Elaina won a notable Korean saimoe tournament last year (implying that their voters participate in ISML as well).

Following her 2 straight finals losses, some members of the Toaru faction expressed concerns in ISML Tieba about Mikoto's championship hopes in the future, as they feel that her best chances to win another Tiara are over, and that she might be downgraded to being just another playoff regular that is passed up in favor of revitalized contenders (e.g. Kaguya, Mashiro) or popular newcomers (e.g. Keke, Marin, Makima, Mahiru).[5][6][7][8][9] 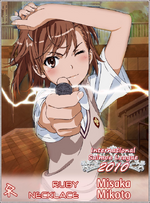 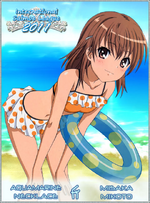 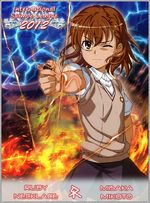 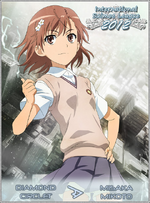 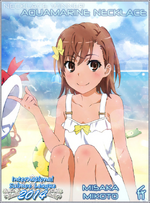 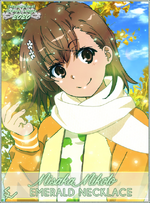 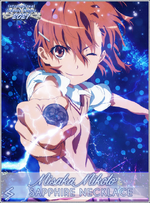 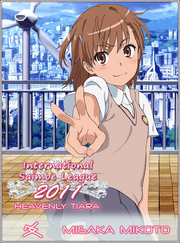 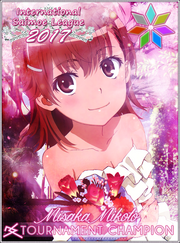 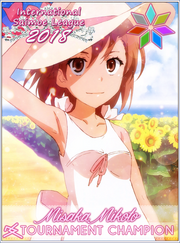 For the full list of Mikoto's contest wins, see 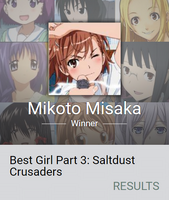 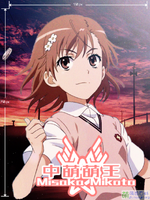 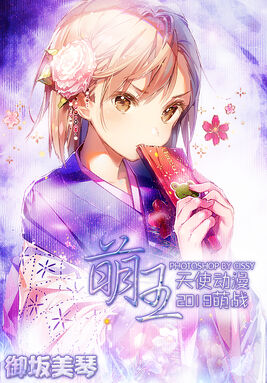 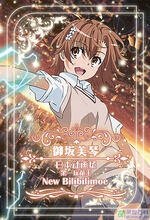 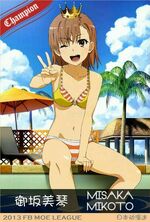 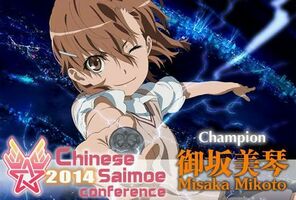 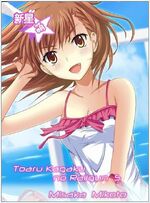