Mikan Yuuki is a character from Saki Hasemi and Kentaro Yabuki's ecchi harem romantic comedy manga and anime series To Love Ru, and the younger sister of the main protagonist Rito Yuuki.

Mikan is one of the more popular Toraburu characters and has appeared in the International Saimoe League several times, with her best finish involving placing 17th in 2014's Nova regular season, barely missing out of the division playoffs. She is the second Toraburu character to win an ISML award after winning the divine circlet in 2016, which was a 16-player consolation bracket fought among girls eliminated in the first group stage (distributed in the first four periods) who had the highest stats. 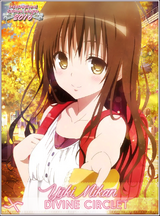