Champion
Mash Kyrielight (also known by her Servant class Shielder) is a main character of the mobile video game Fate/Grand Order, and its anime adaptations by multiple studios.

Mash made her anime debut in 2017 through the Lay-duce anime adaptation of the First Order chapter. In China's Bilibili Moe 2017, she, along with fellow main character Dr. Roman, were subjects of a massive campaign led by the F/GO players, with them being the central figures of the group dubbed the "Moon Faction" in the so-called "Type-Moon vs. Earth War". The campaign was overwhelmingly successful, with both of them being crowned as champions, and their victory precipitated the Fate franchise's dominance of the next Bilibili Moe tournament.

However, Mash is essentially non-existent in ISML and r/anime's Best Girl Contest, having been overshadowed by other more popular Grand Order characters who got their own anime adaptations. In the case of r/anime, she's cut off by the 5 characters-per-franchise limit due to being part of the Fate universe.

(8/17) The "war" was started through the events of a highly controversial Round of 32 match between Mash and Dragon Maid representative Kanna Kamui. The young dragon was leading by a comfortable margin at first, but then a Dragon Maid fan started to mock and provoke the F/GO userbase, citing a lack of support to their characters, among other things. This greatly angered the Grand Order playerbase, with them exchanging various insults / threats / other bad messages throughout several social media platforms.

In response to this provocation, F/GO fans organized a plan to coordinate giving mass true-love ticketsNote 1 to Mash, knowing that Kanna fans will try to save their tickets for later rounds. The strategy worked, and by the end of the matchday the Shielder has overtaken the electric dragon's votes by 20,000, with the true-love ticket count having an even more disproportionate difference. The final score was 113,916 - 93,041  (TL Votes: 13,368 - 2011). 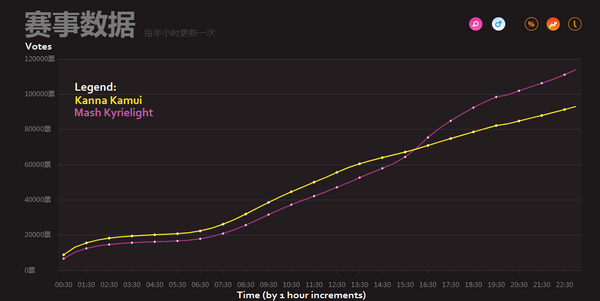 Note 1 A true-love ticket is worth 2 votes. It can only be used once, and using it prohibits you from voting other contestants on that day.

(8/18) An anonymous user's Weibo Post had caused a huge stir: Staffs acknowledged spite-voting conspirators, but they claimed that the conclusive evidence was poor. Then, they said the result of the Mash vs Kanna would not change. Maid-Dragon fandoms raised some critical suspicion: Mash's votes were traded for game products, according to Weibo FGO Forum's Post. Then, FGO forum claimed that MD fandoms manipulate public opinion.

(8/19) A Bilibili's VD uploader - 赫萝老师(He luo laoshi = Holo-sensei) - created a UCC that satirizes FGO. This UCC was banned in a day, due to protests from the FGO fandom. The numerous slander comments on the video contributed to the spread of this war outside Bilibili. From this point, Konosuba fans had joined the anti-FGOs.

(8/20) Holo-sensei added an explanation VD, but reaction of FGO fans who thought they were insulted was cold.

(8/22) In Bilibili Moe special broadcasts, FGO users bursted great dissatisfaction with group draw results. Furthermore, Some FGO Hooligans had claimed allegations that tournament organizers are trying to crack down on FGO characters. To refute this claim, Staffs promised to expedite the situation directly.

(8/24) In the semi-final Live broadcast, FGO fans began to complain when the host 熊二(Xiong Er) briefly introduced Mash among the semi-finalists. This reactions made Xiong Er to bear resentment, so he intentionally ignored FGO and Mash's fans throughout the broadcast.

(8/25) The FGO fans promised to unite with the AOT fans to support each other's characters. After hearing the news, the anti-FGOs shot down Levi in the semifinals. But FGO fans went back on promises made to AOT fans. Meanwhile, a lunatic Saekano fan uploaded a video on the FGO forum; which includes a scene of burning Saber figurine. As a result, Megumi Katou was eliminated in the semifinals, due to a rally of angry FGO fans.

(8/30) A vote was held for the agenda in Bilibili, related to the permanent deletion of Holo-sensei's FGO-criticizing UCC. This VD was removed, as a result of the vote. (2913:1718) The aftermath of the war was insanely terrible. Several Chinese Communities had been exposed to persistent cyber terrorism throughout August 2017, such as Dragon Maid, FGO, Konosuba, SAO, AOT, Your Name, Eromanga-sensei, Saekano forums.

Round of 32 WIN, THE START OF CONTROVERSY. GET YOUR GAS MASKS AND BIOHAZARD SUITS READY

(Round of 16 win ft. Romani) WE ARE LEGION FATE GRAND ORDER. WE DO NOT FORGIVE. WE WILL WIN BILIBILI MOE. YOU CANNOT STOP US.

YOUR PITIFUL BLADE SCRATCHED NARY A MARK ON MY SHIELD. YOUR SWORDMANSHIP IS WEAK!

THE MOON PEOPLE WILL FOREVER BE SUPERIOR IN KIND THAN YOU PATHETIC EARTHLINGS. NOW, KNEEL BEFORE US AND WEEP!

YOU'RE SENDING A 10-YEAR OLD INCEST BAIT AS YOUR BEST FIGHTER??? TRULY, THE EARTHLINGS PROVE THEIR PRIMITIVITY IN THE ART OF WARFARE. THEIR NOTION OF "CULTURE" IS LAMENTABLE...