Levi is a major character featured in Hajime Isayama's manga and anime series Attack on Titan. Widely considered to be "humanity's strongest soldier", Levi is the captain of the Survey Corps' special operations squad. He appears as a middle-aged short man with a youthful face and narrow eyes, and possesses a cold and stern demeanour. Despite his harsh facade, he is shown to care for his squadmates, and is also an obsessive clean freak.

His full name, Levi Ackerman, isn't actually revealed until the middle chapters of the manga (equivalent to anime season 3 part 1) which covers the story's "Uprising Arc". There, Levi is hunted by the "Anti-Personnel Control Squad" and their leader, his uncle Kenny Ackerman. His backstory is also shown in this arc, where he was revealed that he spent his childhood living in squalor as an underground thug. Despite the "Ackerman" surname being an apparent spoiler, Levi's full name is used extensively in many online websites.

Levi is the most popular Attack on Titan character. True to his epithet as "humanity's strongest soldier", he has established himself as one of the strongest characters in major anime character popularity contests because of his many badass and sakuga (well-animated) scenes. The captain earned his first major title in 2020, where he won the championship rounds of r/anime's sixth edition of Best Guy in relatively dominating fashion.

Levi is also a noted powerhouse in the International Saimoe League, where he is usually the only Attack on Titan representative capable of reaching playoffs, or even winning the championship. Ackerman has secured 2 pendants to his name, and reached the quarter-finals three times (2013, 2018, and 2019); his best finish was fourth in 2018 after winning that year's consolation matches.

The captain has made three appearances in China's Bilibili Moe contest from 2015 to 2017, thanks to Attack on Titan's spin-offs being broadcast during those years. He was one of the favorites to win the 2017 edition, but ultimately finished fourth place after losing to Kirito in the semis, and Takashi Natsume in the consolation match. 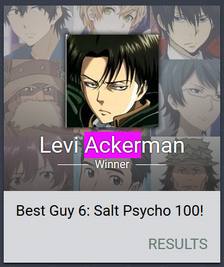 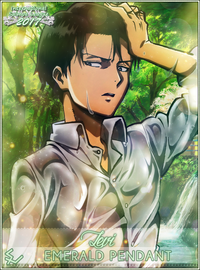 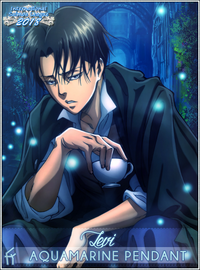 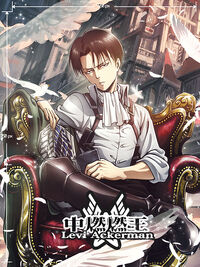 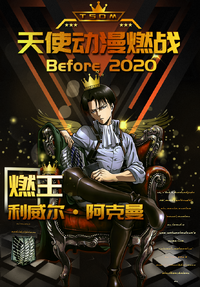