Lelouch Lamperouge, born Lelouch vi Britannia, is the main protagonist of Sunrise's anime series Code Geass. He is one of the most popular and successful anime characters of all time in terms of anime character popularity contests.

Emperor of the West (/r/anime history)[]

The Emperor's winning spree continued with another major championship in 2015, winning r/anime's inaugural Best Guy Contest by defeating future winners Spike, Koyomi, Roy Mustang and Okabe, and then geassing Kamina right through his shades in the final match. This victory was helped by the fact that Lelouch is by and large the undisputed most favorited character on MyAnimeList, a site that many subredditors use.

Lelouch was allowed to compete on China's Bilibili Moe due to appearing in the Code Geass movie spin-off / interquel series Akito the Exiled as a brainwashed puppet of Britannia named "Julius Kingsley".  The fact that "Julius = Lelouch" should be treated as a spoiler is rendered moot because of this. Nevertheless, his immense loyal following remains strong despite his covered-up Geass eye. His campaign started by cruising past his group before overpowering Son Goku in the Round of 32, and firing Umaru's brother out of his job in the Round of 16.

The Elite Eight posed a more difficult challenge to Lelouch in the form of Archer and his trademark Unlimited Blade Works onslaught. After surviving his attack by ~4800 votes. Lelouch faced tournament hopeful Gintoki Sakata in the semi-finals which resulted in a grueling, closely-fought match in which the swordman kept a close pace against the rebellious mastermind. Ultimately, Lelouch bested Gintoki in a battle of attrition, winning by a margin of ~2800 votes and advanced to the finals where the unkillable octopus teacher Koro-sensei awaits. The match would retroactively become THE deciding factor in who gets the "Triple Crown" of male contests, but it proved to be anti-climactic as the rebel leader's massive army of loyal supporters outnumbered the teacher's students by a fairly lopsided difference of  ~16,000 votes.

After his win in China, Lelouch's victory tally means that he is the male anime character to win the most number of major contests: Korea Best Moe, ISML (which still counts despite being an exhibiton),  r/anime's Best Guy, and Bilibili Moe. He is also the only anime character to win the latter two tournaments in 2015, and remains the male to ever win two major championships in a single year. (other male character is

Lelouch eventually made his return to ISML's main stage in the 2020 edition alongside 2011 female winner Mikoto Misaka. Unlike the Railgun however, his presence is now overshadowed by the burgeoning Kaguya-sama voting block, the ever-present Fate faction, and several one-man powerhouses from multiple shows. Nonetheless, Lelouch is expected to reach at least the Diamond period, and is perceived as a potential threat due to his winning history.

The first group stage saw Lelouch being drawn into the unusually competitive Group J, consisting of top-seeded Subaru, former pendant winners Otonashi, Willem, and Soma, and ISML minnow Giorno. The Black Prince secured qualification by beating the latter four males, but decisively lost to the season 2-boosted Re:Zero protagonist in the final match. This result made the group end in a three-way tie at the top with Subaru and Willem posting 4 wins as well; after tiebreakers were settled, the results meant that Lelouch went from a potential pendant appearance (before his loss) to settling for third place.

The King of Elevens' championship quality was tested in the second group stage, where he was drawn into the 16-man Group C as a 7th seed. Although determined to win, Lelouch performed as expected of his standing, having managed six wins in the first ten matches (Topaz and Amethyst). Coming into Sapphire, he would directly compete for the last direct qualification spots (5th-6th) against Charlotte main man Otosaka and SAO newcomer Eugeo, needing to win against both of them in order to advance. However, a shock loss to low-seeded Nagisa Shiota hampered Lelouch's chances, and although a win against Eugeo kept his hopes alive, a narrow defeat against Otosaka in the penultimate round sealed his fate of being relegated into the wildcards. He ultimately finished 7th with nine wins --- one game behind his group rivals.

Lelouch's campaign ended in the Sapphire Wildcard round as he failed to secure a spot among the top 8 survivors, placing 14th out of a field of 20 males. Unlike his fate in the Re:surrection films however, the re-count incident did not save him from being eliminated from the tournament. 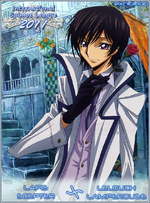 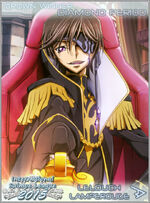 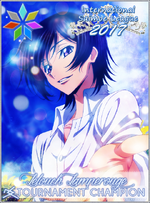