Kuroyukihime (literally "Black Snow Princess") is the main heroine of Reki Kawahara's light novel and anime series Accel World. A highly popular, intelligent, and attractive student council vice president, Kuoroyukihime takes interest in Haruyuki Arita, an overweight student who spends his days playing squash alone in the school's virtual network, and beats his high score. She then introduces him to a game called "Brain Burst", an "Augmented Reality MMORPG" where color-themed players challenge other players into duels for acceleration points, which basically slows down their perception of the real world.

Kuroyukihime turns out to be an infamous veteran of the game who uses an avatar named "Black Lotus". She later confesses her feelings for Haruyuki, who enters the game as a flying humanoid named "Silver Crow", and becomes his partner. Together, they set out to defeat a group of prominent players dubbed the "Six Kings of Pure Color", obtain the highest level in the game, and meet its developers in order to learn the reasons behind the game's creation.

The vice-president has appeared in various forms; in the virtual network she wears a black dress with massive butterfly wings, while her Black Lotus avatar is a hovering metallic faceless humanoid which uses dual swords as weapons. Her true name remained a long-standing mystery until the release of recent volumes.

Kuroyukihime is best known for her appearances in the International Saimoe League, where she achieved success in her first years in the tournament partly because of the novel being created by the same author of the highly popular series Sword Art Online. Her achievements include a seasonal diadem in 2012, a necklace in 2014, and three consecutive playoffs appearances.

Kuroyukihime first appeared in ISML's 2012 spring seasonal contest, defeating Tsumiki Miniwa and Eru Chitanda in the bracket stage to win the diadem award. She then lost to Fall winner Rikka Takanashi in the inter-seasonal exhibition.

Her career in the ISML main tournaments was a typical one - characterized by stellar rookie and sophomore year performances, followed by a steady decline in results. She entered the 2013 edition as a Nova contestant, posting a 32-3 record in the regular season. The Brain Burst player reached the semi-finals of the division playoffs where she lost to Rikka again, and subsequently made it into the quarter-finals of the tiara bracket, losing to Kanade Tachibana and placing 10th in final standings.

Kuro's best year occurred in 2014 when she won the ruby necklace award over Kurumi Tokisaki despite receiving fewer votes; the round was allegedly influenced by a fan talking shit in the ISML forums[citation needed]. In the postseason stage, she won three games in the Swiss-system division playoffs, but was later eliminated by Kuroneko in the first round of the tiara bracket. She recovered with three straight consolation wins to claim 6th place, her best-ever finish in the tournament.

Kuroyukihime shifted to the Stella division in 2015, finishing the regular season in 10th place with 25 wins, but was eliminated after scoring just one win in the division playoffs. With the regular season's format undergoing a complete overhaul in 2016 and 2017, the Burst Linker continued to appear in the latter periods of these years, but could not return into the playoffs both times.

Her presence eventually declined starting from 2018, where she was eliminated in the Topaz wildcard round (2nd period), and then failed to get enough nominations for the downsized 2019 edition. She finally retired in 2020 when she did not show up in the nomination results page. 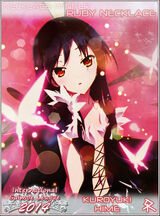