see list below
Waifu Rating = 770 (4.9 IDV)
Kurisu Makise is a main character featured in the 5pb and Nitroplus visual novel Steins;Gate, a major character in the sequel series Steins;Gate 0, and its anime adaptations by the studio White Fox.

Kurisu debuted in Spring 2011, where she spent her first three years serving as cannon fodder in Japan's Anime Saimoe Tournament. In the same time span however, she would finish as runner-up in the 2012 edition of Anizone's Korea Best Moe Tournament where she lost to Hitagi Senjougahara.

Kurisu is one of r/anime's most popular and beloved girls of all time, being the most-favorited female character in MyAnimeList (a site many anime redditors use), and immediately established herself as a prodigious example of "good taste" by winning r/anime's inaugural Best Girl Contest in 2014. She also won the first "Best of the Best" exhibition tournament, consisting of the finalists from previous Best Girl, Guy and Character contests, as well as finishing runner-up in the second Best Character tournament in 2016, the last contest before the ban of all champions from participating in future r/anime contests.

Christina also maintains a fairly strong following in China's Bilibili Moe contest, reaching the quarter-finals in 2015 and the round of 16 in 2018. Even her AI version from the sequel Steins;Gate 0 (Amadeus) is allowed in the 2018 edition as a separate contestant.

The scientist's career in the long-running International Saimoe League contest started out slow, but starting in 2015, she managed to make the postseason for the first time. However, she has yet to advance beyond the first round of the elimination stage, having failed to do so for five consecutive years. Kurisu's necklaces were won by winning the Diamond group stage in 2016, a feat she would replicate three years later.

Kurisu shares a rivalry with Monogatari heroine Hitagi Senjougahara, having three significant meetings in the major tournaments. Two of them occured in the FINALS where the Crab won both matches, but the Assistant got the more important one (a Best Girl 1 semi-final match) in which she went on to win the entire contest.

"If Makise Kurisu were to hear about a site where people vote on how moe she is, she would immediately launch a denial of service attack on its server. And blush furiously. And deny doing it.

It is therefore for the better that Kurisu remains unaware and can concentrate on revolutionizing the world with her research. Perceptive and bright, Kurisu takes on mysteries of science that have baffled the great minds of previous generations... and solves them one by one. It is hard work, involves hours spent mulling over complex formulas and allows for little to no beauty sleep, but you get bragging rights once everything falls neatly into place. And you can wear a cool lab coat, too.

When too tired for productive thinking, Kurisu joins the anonymous hordes roaming Internet forums. More honest with herself when nobody can see what she is doing, Kurisu enjoys discussing the same rumors and theories she rejects as silly when talking in 'real life'. She is fluent in all kinds of Internet lingo and metaphors, and often perceives the world around in terms of various memes... but nobody will ever find out, right?

As much as she would like to appear perfect, Kurisu has her own weaknesses and vulnerabilities. But when somebody is needed to whip a group of good-for-nothings into saving the world, she is as good a candidate as they get.

Kurisu has struggled to make the postseason in the Nova / Stella era of the long-running International Saimoe League contest, barely missing the postseason by one place in 2012 and 2013, and by three places in 2014. Her fortunes have improved since then, and by 2015 she was able to reach the postseason for the first time, going as far as the round of 16 in the second postseason phase. 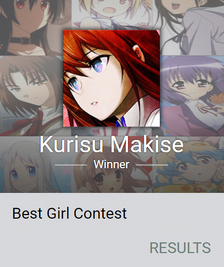