Kanna Kamui is a character from Cool-kyou Shinja's manga Miss Kobayashi's Dragon Maid. Named after the god of thunder and lightning in Ainu mythology, Kanna is an electric dragon who followed Tohru to the human world, where she finds her under the care of the Kobayashi-san household. She assumes that Kobayashi seduced Tohru, but after the misunderstanding was resolved, she joins Kobayashi's adoptive family. Kanna is young by dragon standards, which is reflected in her human appearance and behavior as an elementary school child.

The loli dragon gained significant popularity in the anime fandom because of her extremely cute, child-like traits, which is enhanced by Kyoto Animation's TV adaptation. She also gained a memetic reputation online as a character that must not be lewded. However, the series itself shows otherwise, since Kanna is featured in sexually suggestive scenes and jokes, like showing emphasis on her thighs, and having a girl whose main gimmick is being obsessively in love with her.

Nevertheless, Kanna has cemented her place as Dragon Maid's most popular character, even more than the titular characters themselves. She is notable for having a colorful history in several saimoe tournaments in East Asia; for instance, she was one of the competitors involved in Bilibili Moe 2017's 8/17 incident, which sparked a site-wide inter-fandom war that lasted until the tournament's end. Kanna also emerged as one of the top tiara contenders in ISML 2018, where she ultimately placed 2nd behind Rem, and became the first girl to lose in the final match twice in the Korean Aniplus saimoe. 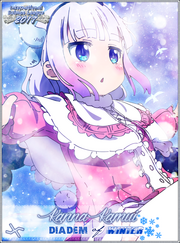 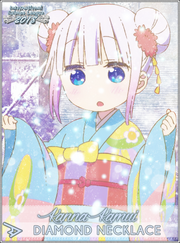