Debuting in Winter 2019, Kaguya quickly became hyped as the hottest "prospects" to come from that year, after she posted dominant wins in both the Winter seasonal contests and the overall "Best Girl of the Year" award in both ISML and r/anime.

The turn of the new decade saw Kaguya establish herself as one of the pre-eminent superstars set to win a major contest in the following years, which she immediately fulfilled with an unprecedented r/anime Best Girl title in her first year of eligibility. This victory also made Shinomiya the first-ever top seed and manga character to achieve this feat in the contest's history. However, she couldn't replicate that performance in ISML 2020 despite a near-perfect regular season, as she fell short against Mikoto in the playoff semi-finals. Kaguya placed fourth overall after losing to familiar rival Mai-san in the consolation match.

[Note 1] (Mods mistakenly ended the round FAR too early) 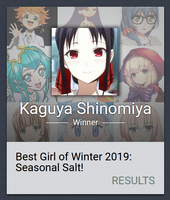 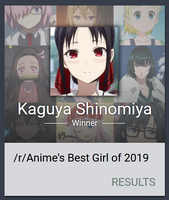 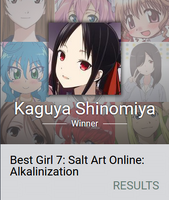