Holo is the main female protagonist and titular character of the Spice and Wolf light novel and anime series authored by Isuna Hasekura. Debuting in the 2008 Winter anime season, Holo was the champion of Anizone's saimoe tournament on that year. The wolf is also a long-time ISML regular, made her only playoffs appearance 2009.

The Wise Wolf is best known in r/anime's Best Girl Contest for being "always the bridesmaid and never the bride" due to her history of consistently losing in the final rounds. She was the runner-up of the tournament's first edition, and has appeared at the Elite Eight in all but one of its editions. Holo is also known for her rivalry with Konosuba's Megumin, which started when the wolf goddess famously toppled the first-seeded crimson demon by 18 votes in Best Girl 4, and further developed when they met again in two more meetings, both of them decisively ending in Holo's favor. 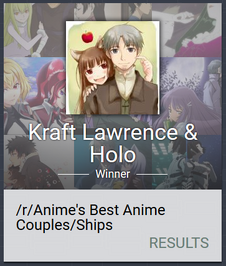