Hachiman Hikigaya is the main protagonist of the light novel My Youth Romantic Comedy is Wrong, As I Expected, also known by its shorthand name Oregairu. He is a student studying in Sobu High School who is described as a bitter, cynical, and antisocial loner possessing a distinctive set of "dead-fish" eyes. In the beginning of the series, Hachiman is persuaded to become a member of the school's Service Club, then only consisting of the school beauty Yukino Yukinoshita. Through his interactions with the school's students and activities, his character begins to change for the better.

The series is praised for its heavy focus on social conflicts and the inner monologues of its characters. In particular, Hachiman is well-known in the fandom for his quote-worthy, philosophical soliloquies showing his pessimistic mindset, such as the famous "I hate nice girls" monologue.[note 1] In the context of waifu wars, he is the center of a shipping conflict between fans of main heroine Yukino, red-head genki girl Yui Yuigahama, and the blond-haired junior Iroha Isshiki; with his teacher Shizuka Hiratsuka and resident otokonoko Saika Totsuka becoming other fairly popular targets for shipping as well.

In this wiki, 8man is best known for being one of the most successful male contestants in the International Saimoe League with 6 awards: the 2018 championship, four pendants, and a tournament of champions win in 2019.

8man is perhaps the greatest contestant ever to compete in the International Saimoe League's male division. Among his many achievements in the tournament include snagging a record-four pendants, which includes Aquamarine 2015, the very first male gem award. This number is only equaled by Fate/stay night's Archer and Raildex's Touma Kamijou. He boasts 103 regular season wins throughout his main tournament career, only suffering just one defeat in the 2015 edition - against No Game No Life's Sora in the final regular season match of ISML 2015.

Hachiman initially made an unremarkable ISML debut in the 2013 male exhibitions tournament, finishing 3rd in the 6-way limited voting stage. After the anime's second season was broadcast in 2015, the loner student's popularity among anime watchers increased; and in that year he was billed as one of the top favorites to win the inaugural male main tournament (alongside NGNL's Sora and Raildex's Accelerator). The three guys predictably finished at the top spots in the regular season, with Hikigaya tied for first with a 34-1 record. However, his seeding score tanked after losing to Sora in the very last match, resulting in a #3 seed in the playoffs. He was eliminated in the quarter-finals by eventual runner-up Koyomi Araragi, forcing him to settle for a 5th place finish.

From 2016 to 2018, Hikigaya secured the top seed in the playoffs three consecutive times, but failed to claim the crown as he finished runner-up twice in 2016 and 2017, behind #2 seeds Sora and Koro-sensei respectively. Embittered by these losses, 8man would finally be given the ultimate salvation in the 2018 edition, winning all 35 of his regular season matches before pulling off arguably the most dominant playoff run in ISML male history en route to winning the Scepter. His most notable stat was setting a new record for the most lopsided male final match by thrashing Archer with a 19,866 vote difference. With this victory, Hachiman becomes the fourth ISML champion to achieve a perfect season..[note 2]

Tournament of Champions
Not to be content with just the scepter, the cynical student turned his eyes on the Tournament of Champions prize. In 2019 he suffered his only loss to Hyouka's Houtarou Oreki in the group stage, but got his revenge in the range-voting final match, resulting in 8man winning his sixth ISML award. Oreki, who shares similar characteristics with him (loner, apathetic, intelligent, gloomy eyes, and black-haired love interests) would eventually become Hikigaya's primary rival in the coming years, not only in ISML but also in other online popularity contests outside the website.

In his second hall of fame tournament in 2020, Hachiman obtained the same group stage result as last year's, only losing to Oreki. However, he could not win against the lazy student in the final match as the Hyouka couple won their first ToC award together after Chitanda won the female tournament. With his girlfriend Yukino Yukinoshita winning the Tiara that year, Hachiman attempted to replicate their own version of the ToC couple's win in 2021, which was dominated by him and Houtarou for the 3rd straight time. He defeated his rival to top the group stage, but the quest for an Oregairu couple win failed as 8man lost to Houtarou in the final, stealing him of a second ToC title in the process. Even though this is likely Oreki's last ToC, 8man's chances for another ToC title remain difficult, since some users predict that Sakuta Azusagawa, the most likely guy to take his place, would become the favorite to win 2022. 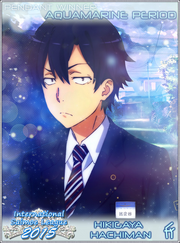 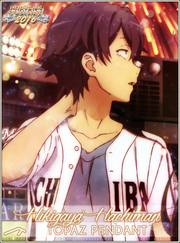 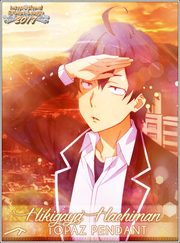 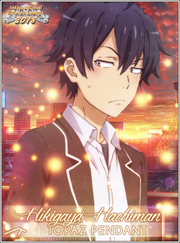 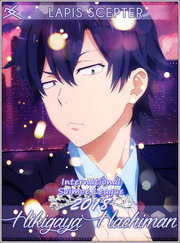 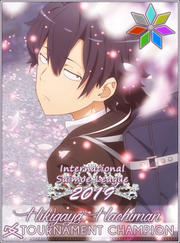 While Oregairu is also very popular in the Western r/anime forums, Hachiman does not get much success in the brackets compared to its female character, which may be attributed to his reputation as an edgy, "literally me" type of character. The Oregairu protagonist has appeared in at least the round of 64 in all of his major contest appearances. He tends to perform better in Best Character, reaching the quarter-finals in two consecutive editions, losing to Edward Elric both times.