Eru Chitanda is the main female protagonist of the 2012 Kyoto Animation TV series Hyouka, adapted from Honobu Yonezawa's Koten-bu (literally "Classic Literature Club") mystery novel series. She was the champion of International Saimoe League's 2015 edition, and the winner of 2020's female tournament of champions. Chitanda is one of only three females who won the ISML championship without winning a necklace, following Fate Testarossa in 2008 and Kotori Itsuka in 2014.

Kyoto Animation does what it does best: making cute girls with incredibly big, detailed eyes. And Chitanda's eyes are one of the most prominent examples of it. Her apperarance has been blessed by the creative talent at KyoAni, and she puts it to good use by winning the 2015 International Saimoe League, making her the second KyoAni girl to achieve this feat. This remarkable achievement is notable for being a dark horse victory, with her being one of the few ISML winners who have never won a necklace.

Meanwhile, in r/anime's Best Girl Contest, Chitanda has established yet another dark-horse reputation as well. She is a middle-tier contender who constantly occupies double-digit seeds, and always manages to get at least Round 4 in all of her appearances. Her best performance came in Best Girl 3 (2016), where she attained her highest seed so far (#9), and reached the quarter-finals before losing to the top seed Senjougahara. Eru also shares an inexplicable "rivalry" with Attack on Titan representative Mikasa Ackerman, with the two of them meeting three times (BG1, BG3, and BG4), the former losing the first and winning the other two. 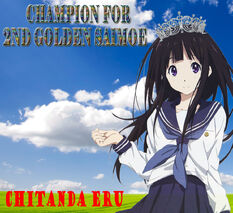 Beware of spoilers and pop-ups