Although clearly designated as the female lead protagonist of her series, Emilia's popularity is largely overshadowed by the much more successful Rem. This doesn't discount her strength in online "Saimoe" contests however, as the continued popularity of Re:Zero ensures that her presence will be felt for a long time.

The Half-Elf enjoys a sustained string of deep tournament runs in both r/anime and ISML. However, she has experienced several unexpected early exits, probably because of the users' mixed reception towards her characterization and her relative lack of presence prior to season 2.

Emilia reached the final of ISML 2017, her first year of eligibility, but lost to Saekano's Megumi Katou. This was the only instance where she finished higher than her arch-rival Rem. In AnimeBracket events, Emilia has appeared at the Elite Eight in two Best Girl contests (2017 and 2020). Finally, in the 2016 edition of Bilibili Moe, the silver-haired girl also advanced to the top 8 where she lost in a highly-anticipated match-up against the blue oni herself, who would later go on to win the entire tournament.

Emilia is the main female lead of the Re:Zero isekai series. She is a Half-Elf hailing from the Kingdom of Lugnica (the story's main setting), and is also one of its Royal Candidates. Despite possessing a beautiful appearance, she is widely discriminated due to her mixed racial heritage, and also because of the fact that her appearance greatly resembles Satella, the Witch of Envy, who was responsible for several negative events that impacted the world many years ago.

Emilia is the first girl Subaru Natsuki meets after the latter's transportation to her world. Subaru quickly falls for her mainly because he believes that she was his designated main heroine. His feelings for Emilia is a major driving force behind his actions which advance the novel's main plot.

For more detailed information regarding her roles in the plot, see Re:Zero's Fandom wiki page. Spoilers in the link.

Her main associated colors are White and Purple.

Secondary colors include Pink (from one of her dresses), Gold (the color of the eagle symbol seen in her main costume), and Green (from the rhombus-shaped crystal on her neck).

Emilia's fans share a heated rivalry against fans of Rem, because both females are romantic love interests to the protagonist Subaru Natsuki. The rivalry intensified during the anime's episode 18, in which Rem brings Subaru out of his despair, and confesses her feelings to him in so many words. However, she is "rejected" when Subaru says these now-infamous words:

This sentence has become synonymous with rejection among anime fans online, and has been made into a meme.

When it comes to online contests, only one significant match happened between them: the 2016 Bilibili Moe quarter final, where both girls were inexplicably drawn against each other in the harder side of the bracket. Of course, by the time you read this, you have already known the outcome of that match. The pair also came close to facing each other in Best Girl 4, with Rem securing 2nd seed and Emilia 3rd, thus meeting each other in the semis. Unfortunately for them, the dream match-up wasn't realized as they were respectively eliminated in the quarter-finals by Yui Yuigahama (#10) and Shinobu Oshino (#11).

If their records were compared, the fact that Rem has always been more popular and successful than Emilia is made clear and undeniable. And with the blue-haired maid being banned from r/anime and ISML due to her champion status, it will take a long time before they could meet again in these events (outside of exhibitions and other contests).

BMoe 2016 icon
Add a photo to this gallery 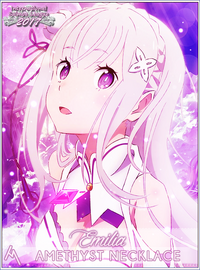 ISML 2017 Amethyst Necklace
Add a photo to this gallery

Retrieved from "https://saimoe.fandom.com/wiki/Emilia?oldid=29972"
Community content is available under CC-BY-SA unless otherwise noted.