Elaina is the titular protagonist of the light novel and anime series Wandering Witch. She emerged as one of the most popular girls to come out of the Fall 2020 lineup partly due to the LN's established fanbase, and gained more fans because of her cute (and hot as fuck) design. The Ashen Witch won ISML's corresponding seasonal diadem, beating seasonal rival Tsukasa Tsukuyomi in the main bracket's final. However, she had less luck in the r/anime counterpart, falling to Tsukasa in the Fall semifinals, and then crashed out of the second round to Katarina in the "Best Girl of the Year" contest.

Because of Elaina's popularity in East Asian countries, users in the Chinese forum ISML Tieba in the Baidu website have speculated her potential to become the strongest performing debutant in the ISML 2021 main tournament, with some predicting the witch to appear (or even win) in necklace rounds and reach the extremely competitive playoffs stage.

Elaina's earliest eligible Best Girl appearance will be the ninth edition held in 2022.

ISML
Add a photo to this gallery 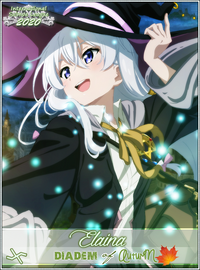 ISML 2020 Fall diadem
Add a photo to this gallery

Retrieved from "https://saimoe.fandom.com/wiki/Elaina?oldid=31148"
Community content is available under CC-BY-SA unless otherwise noted.