Great Detective of the East

Detective Conan's sizable Chinese fanbase is a primary factor in his frequent appearances in the International Saimoe League, where apparently a voting faction is dedicated for him (and Ai Haibara) to receive enough nomination votes to keep them qualified in the contest. However, this support isn't enough to sustain him over the course of the regular season, as he often loses out in the middle periods against typical ISML powerhouses. Conan earned his first honour there by winning the Aquamarine ring, an exhibition award in its 2020 edition.

Outside of the otaku-oriented saimoe contests however, Conan is one of the most famous anime and manga characters among mainstream audiences. The franchise is one of the biggest and longest running manga series with over 1000 manga chapters, with anime episodes nearing that amount, and over twenty feature films. The show has been broadcasted to multiple countries and translated into several languages as well.

Shinichi Kudo is a teenage detective prodigy with a reputation for solving crime cases no one has ever done before. One day, he encounters two men of the villainous Black Organization, who forced him to ingest the poison named APTX 4869, leaving him for dead. However, instead of killing him, the poison caused his entire body to shrink into a 6-7 year old child while still retaining his mental faculties. After this incident, Shinichi resolves to take down the Black Organization and find an antidote to the APTX 4869 poison.

In his shrunken form, he goes by the alias "Conan Edogawa", based from the names of real-life mystery writers Arthur Conan Doyle and Ranpo Edogawa. As a physically de-aged child, he's forced to study in elementary school where he forms a band of friends called the "???". At the same time, Conan continues to solve criminal cases using his childhood friend's father as a front.

More detailed information can be found in the Detective Conan World wiki page. As always, beware of spoilers.

While many fans (and the DCW wiki) regard Conan and Shinichi as separate characters, most anime contests, as well as this wiki, will treat both of them as the same person.

ISML icon
Add a photo to this gallery 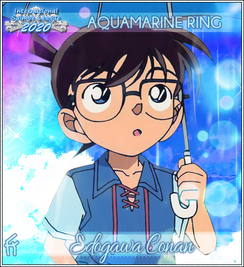 Retrieved from "https://saimoe.fandom.com/wiki/Conan_Edogawa?oldid=26700"
Community content is available under CC-BY-SA unless otherwise noted.