Chitoge Kirisaki is a character featured in Naoshi Komi's romantic comedy manga and anime series Nisekoi. She is the main love interest of the male protagonist Raku Ichijou. Chitoge is a blond-haired girl who wears a red ribbon and black thigh-high stockings, and her behaviour towards Raku is a classic example of a tsundere archetype.

Chitoge enjoyed significant popularity during the anime's runtime from 2014 to 2015, and made notable results in several character popularity contests during that time. Her manga has gained a place in anime history for being one of the most famous examples of "shipping wars", which was mainly contested between her fans and Kosaki Onodera supporters. But after the conclusion of the manga's storyline, the hype behind it faded, and with it comes a subsequent decline in popularity and power in character contests.

Chitoge won International Saimoe League's winter seasonal in 2014 over Kosaki, and claimed the emerald necklace in 2015's Nova division. She struggled in the division playoffs, but a win against Isuzu Sento in round 3 ended up sealing her place in the tiara bracket as the 8th seed from Nova, with 2 victories. The blonde student then defeated Stella division winner Ayase and a season 2-boosted Yuigahama to advance into the semi-finals, where she lost to Chitanda and Mashiro to finish in fourth place. 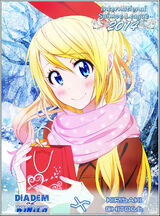 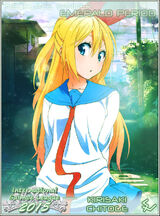