Ayase Aragaki is a major character from Tsukasa Fushimi's light novel and anime series My Little Sister Can't be this Cute, or Oreimo for short.

Ayase is the series' second-most successful female in saimoe tournaments, behind Kuroneko and ahead of Kirino. She had a uniquely strong position during International Saimoe League's Stella/Nova division split, resulting in an exhibition gem win in 2013, placing fourth in 2014, and winning the Stella division playoffs in 2015 as the lowest-seeded contestant. 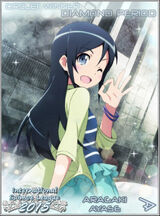