Archer is a primary character featured in Type-Moon's visual novel Fate/stay night, and is a recurring character in the Fate universe. His most prominent role in the original novel is in the second route Unlimited Blade Works.

Archer is one of the most popular male characters in the Fate franchise. He experienced a surge in power owing to his route being animated in the mid-2010's, which continues to the present day. He holds the joint-most number of pendants won in ISML with four awards (shared with Hachiman Hikigaya), and has come close to winning the championship in 2018,  suffering a massive loss in the final against the same guy.

Archer's highest achievements elsewhere include the quarter-finals in r/anime's Best Guy 1, and third place in the 2018 edition of Bilibili Moe (using his true identity). In the latter contest, he fought two consecutive canon battles, losing against Fate protagonist Shirou Emiya before winning the consolation match against Lancer.

He is also the namesake of the "GAR (Gay for ARcher)" term, which originated from 4chan. The term is supposedly a misspelling of an anon's post demonstrating his love for the character.

A messy room is not the softest landing out there, but Archer will make due with it.

Archer only has a vague recollection of who he is, which is not the best state to be in when about to take part in a war. However, he understands his purpose well enough, and has no qualms about carrying it out. The mage who summoned him might have a sharp tongue and a short temper, but at least she is more than capable in her craft, which is just what Archer wanted.

Archer is a man of conflicting characteristics. He would refuse to help someone who does not meet his standards, yet he will move to save the same person, even against his better judgment. Archer prefers ending things as quickly as possible, but knows when it is necessary to retreat and rethink one's strategy. Archer would rather work with people useful to him, but is often seen going off alone doing his own business. What could it be that occupies the mind of the man who cannot recall his true name?

Atop a hill of blades, he continues to pray.

The first installment of the Fate series began in 2004,the year of release of the eroge visual novel Fate/stay night, developed by the company Type-Moon. The story follows the magus Shirou Emiya as he is caught in the "Holy Grail War", a battle royale where seven magi, called "Masters", and their respective "Servants", which are personifications of historical and mythological figures, fight each other for the "Holy Grail", an artifact said to grant any wish to the winner. The game is comprised of three routes, which are played one after the other; each route focuses on one of the main three heroines which becomes Shirou's love interest.

These routes are named:

Each route has been given an anime adaptation as well:

Archer appears as a major character in all routes, but he is most involved in Unlimited Blade Works, where the circumstances surrounding his true identity and his relationship with Shirou are revealed. The final line of his famous chant also references the route's title word-for-word.

Bilibili Moe 2015
The Chinese website Bilibili is known for its massive Fate fanbase, so it's not surprising that Archer, one of the franchise's most popular characters, easily becomes a tournament favorite to win the website's "saimoe" contest.

Archer made his first appearance in the 2015 edition at a time where the UBW anime adaptation was currently airing. The first opponents he faced were comparatively weak: the only strongest rival in his group was Conan Edogawa which he brushed aside, and in the bracket stage, he easily blew past Fairy Tail's Natsu and Gintama's Sougo Okita. However, Archer suddenly faced a massive challenge in the quarter-finals as he got drawn against Code Geass' Lelouch Lamperouge. After a long, hard match, the Servant ultimately could not handle the strength of the Emperor's geass-influenced supporters, losing the match by nearly 5,000 votes. Thus, he was eliminated from the tournament.

Although the 2016 and 2017 editions had Fate characters in those contests (with the latter year particularly being infamous for its voting brigade), Archer did not appear in the shows that were aired during that times (Prisma Illya and Fate/Grand Order).

Bilibili Moe 2018
The Red Servant eventually returned to the main stage in 2018 under the name of his true identity. With the website still reeling from the effects of the 2017 F/GO brigade, this year introduced even more eligible Fate animated installments, with Archer qualifying due to his role in the first Heaven's Feel movie in 2017. As a result, the tournament was widely believed to have resigned itself to the supposedly unassailable might of the franchise's popularity.

With Archer's qualification essentially a formality, he was drawn into Group C1, where again his qualification proved yet another formality despite the presence of Okabe in the group. In the bracket stage, Archer easily cruised through the early rounds, expelling CotE's Kiyotaka in the round of 32 and overpowering F/GO's Merlin in the round of 16. He then faced Overlord protagonist Ainz Ooal Gown in one of the few non-Fate vs. Fate quarter-finals match-ups. As expected, Archer made short work of the skeleton to advance to the Final Four, which would become solely occupied by males from Fate/stay night.

The final stages of the male tournament suddenly became similar to the narrative of the Unlimited Blade Works route: Archer fought a grueling battle against his rival Shirou Emiya, which ended in a canon victory for Shirou, the latter earning the right to face Gilgamesh in the title match. Archer then found himself in an equally epic fight against Lancer for the bronze medal; while the climactic title match's results were subverted, this one went the same as the novels --- with the red servant claiming third place, his best-ever finish in the contest. 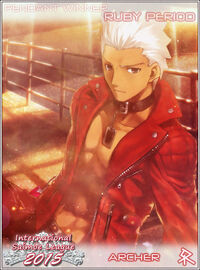 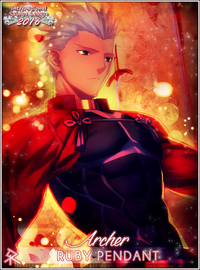 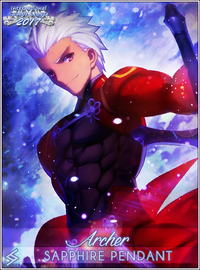 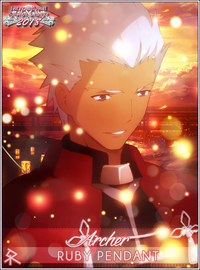