Ai Haibara, also known as Anita Hailey in the American release and Vi Graythorn in the movies, is introduced as the alias of Shiho Miyano, a former member of the villainous Black Organization who worked as a researcher under the codename "Sherry". Born into a family of Black Organization members, Shiho is a gifted chemist who was responsible for creating the lethal toxin APTX 4689. After her sister was killed, she betrayed the organization and attempted suicide by ingesting the pill containing the toxin, but instead of dying, her body shrunk into a child's size (similar to Shinichi Kudo, another victim of the toxin). Shiho escaped the organization and was found by Dr. Agasa, who took her in and gave her the name "Ai Haibara" to protect her real identity.

Ai is the most popular female among the series' massive cast of characters. Because of the anime's long-running schedule, Ai has appeared in nine out of thirteen editions of 2channel's Saimoe, but she only won a single round in 2010. In the Anizone counterpart she managed a top 16 finish in the 2008 edition.

Haibara has also competed in the International Saimoe League, debuting in the 2016 edition and establishing herself as one of the regularly-appearing contestants a few years later. In 2018 she competed in her first and only necklace match to date, placing 2nd in the Amethyst round behind Chtholly Nota Seniorious. Her Main Tournament appearance streak was broken in ISML 2021 when her high nomination votes and the anime's year-round schedule caused her to be assigned for that edition's newly-revamped Winter seasonal league instead, becoming a primary contender for that season's diadem. Despite losing to Kyouko Hori in the group stage, Haibara qualified for the diadem round where she finished 2nd behind Miku Nakano, and secured a spot on that year's seasonal league playoffs. 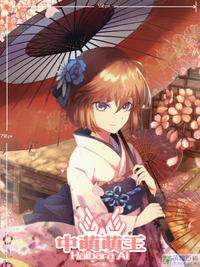